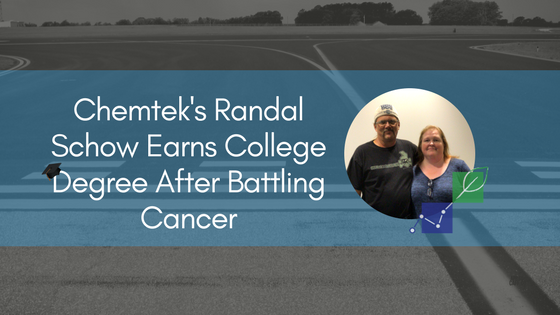 As March comes to a close and Spring begins, it’s a good time to take a look at your progress toward your 2018 goals.  If you need a little inspiration, look no further for than Chemtek’s own Randal Schow, an employee of eight years. Randal has generously shared his story of overcoming the toughest battle of his life – melanoma. His story gives us new perspective on setting goals and sticking with them through life’s most challenging obstacles.

Randal is a member of Chemtek’s Airfield Maintenance Services team. One October evening in 2012 while chatting with other members of his team, he decided to pursue his goal of earning a Bachelor’s degree in project management. Shortly after, he enrolled in online classes at Colorado Technical University (CTU) while continuing to work for Chemtek. One year later in October 2012, Randal was diagnosed with stage 2 melanoma. He received treatment while continuing to chip away at his degree. However, his physical condition took a turn for the worse in the spring of 2014. His stage 2 cancer which had been in remission returned as stage 4 melanoma that had metastasized to his abdominal cavity and back. He underwent multiple surgeries at Duke Hospital, including having two rods and eight screws put into his back where the cancer had been attacking his vertebrae. He began a newly discovered cancer treatment which was a form of gene therapy. This treatment allowed his immune system to attack the cancer like a virus – and it worked. While Randal still has regular appointments to monitor the little bit of cancer that remains, he is doing well and as of October 2017, is a proud college graduate!

David Rigsbee, speaking about Randal’s incredible journey, says “All of that is what makes Randal being able to finish school in the time frame that he did even more special, because it’s hard enough to work a job and focus and go to school part time. But to do that plus battling cancer makes it an even greater accomplishment.”

Standing firm in his goals was essential to Randal’s success. To other adults considering returning to school, he says that the struggle is worth it. It may not seem like it in the moment with many challenges to overcome, but down the road the commitment pays off. He takes pride in the improvement of the quality of his work and looks forward to future professional growth.

These past few years have been life-changing for both Randal and his wife, Cheryl. She was by his side the entire journey and helped give him the support and push he needed to persevere. Reflecting on that time she says, “It’s been a struggle, a good struggle because he’s fought hard. He could have laid down and said the cancer’s going to win, but he didn’t. He stood up and fought, and we all fought with him.”

That family support was critical during a trying time. “It changed my perspective on a lot of things,” Randal said, “and not just life in general: how you treat people, the mistakes you made in the past you reflect on differently – and most importantly the fact that the people closest to you are the most important people to be around.”

We can all take time to remember how important our family and friends are, especially as think about our own lives and dreams for the future. Randal’s story is an inspiration to many, demonstrating the true value of hard work in the face of adversity.