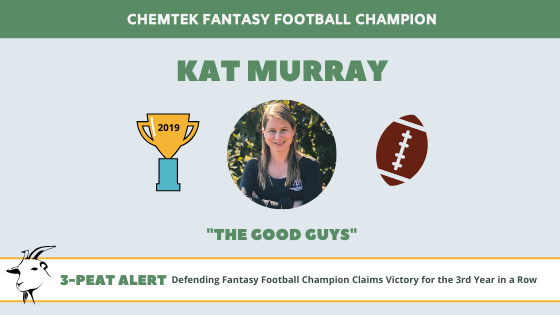 Chemtek recently wrapped up the annual Fantasy Football League in historic fashion! Kat Murray lead her team The Good Guys to clinch the championship in an unprecedented 3-peat. This concluded the fourth season of Chemtek’s organized fantasy league. Late in August, we carefully drafted our teams in pursuit of the highest level of bragging rights and the title of “2019 League Champion.” Our office is filled with competitive people and the lunchtime football talk is always entertaining!

Eight teams competed, with some fighting for a first-round bye, and others battling for a playoff spot. Two teams dominated the regular season- Chan, led by Saquon Barkley and Patrick Mahomes, and MJ Bucketz, led by Christian McCaffrey and Michael Thomas. While it may have seemed like these two teams were destined to meet in the Championship round, this is not how fantasy football works. Late season surges by The Good Guys, led by Lamar Jackson and Ezekiel Elliott, and Team Sparkle, led by Jameis Winston and the Patriots Defense, caused the tides to turn in their favor. In the semifinal round, Team Sparkle dethroned the regular season champion, MJ Bucketz, in thrilling fashion led by outstanding play from Jameis Winston. Similarly, The Good Guys took down powerhouse Chan behind Fantasy MVP Lamar Jackson. This resulted in The Good Guys and Team Sparkle duking it out in the final, with The Good Guys completing the improbable three-peat.

Teams had to endure injuries to players and bye weeks, strategizing each week on how to best represent their team. Ultimately Chemtek’s Fantasy Football league is an enjoyable source of competition and camaraderie, and we can’t wait to play again next year! Congratulations to The Good Guys, managed by our Marketing Director, Kat!